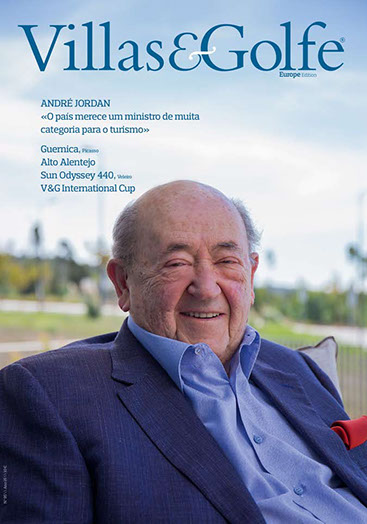 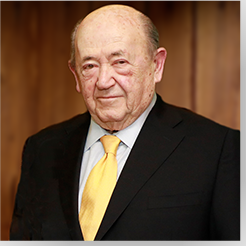 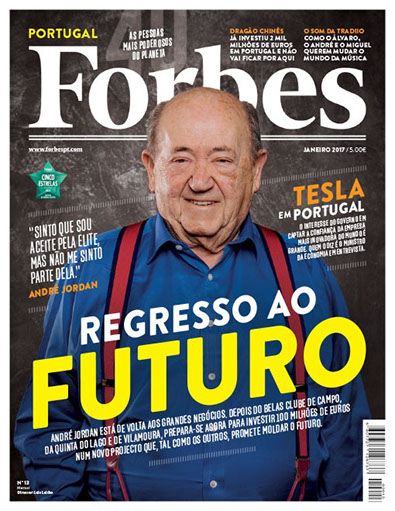 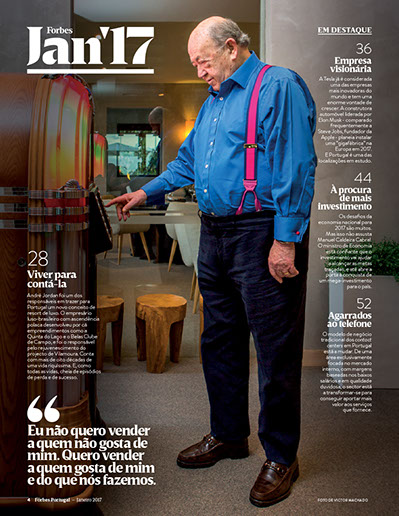 Forbes magazine (Portugal) devotes the cover and ten pages of its January 2017 edition to André Jordan, a work of journalist Pedro Garcia with photos of Victor Machado.

«Magazine Imobiliário» distinguished Gilberto Jordan as «Personality of the Year 2017». The award was delivered at the Palácio Vila Galé Hotel in Paço d'Arcos, Portugal, in a public ceremony attended by personalities linked to the real estate business. The award recognizes Gilberto Jordan professional career aimed to promote top quality real estate, based on innovation and environmental sustainability, such as his latest project at Belas Clube de Campo, the Lisbon Green Valley. At the occasion, Gilberto Jordan recalled that this project has just won the «Innovation in Construction Award»: «I believe this distinction, which I receive with great satisfaction and pride, is essentially due to the work carried out over more than 20 years at Belas Clube de Campo, a high-quality development that incorporates the most evolved and demanding construction and sustainability solutions and which is now underway a new phase, the Lisbon Green Valley, which will revolutionize the real estate business in the Lisbon region. This is undoubtedly the best development in the region and the new Lisbon destination!»

Gilberto Jordan, 56, was born in Rio de Janeiro, Brazil, and lives in Portugal for many decades. Son of André Jordan, Gilberto inherited his father's talents for real estate promotion, tourism and sustainable planning. He is a member of several national and international organizations and has been recognized by the real estate industry with many other distinctions. It was from the hands of André Jordan that he received the trophy that symbolizes his choice by «Magazine Imobiliário» as «Personality of the Year 2017».

Top figures from Portugal’s tourism and real estate sector met at a conference, which ran on Monday 13 November, organized by  «Exame» magazine. André Jordan alerted the participants that while the Golden Visa programme had attracted €6Bn in six years and was a  decisive factor in attracting overseas capital to Portugal, tourism had contributed most to the country’s economy by creating 300,000 jobs and attracting €11Bn last year. 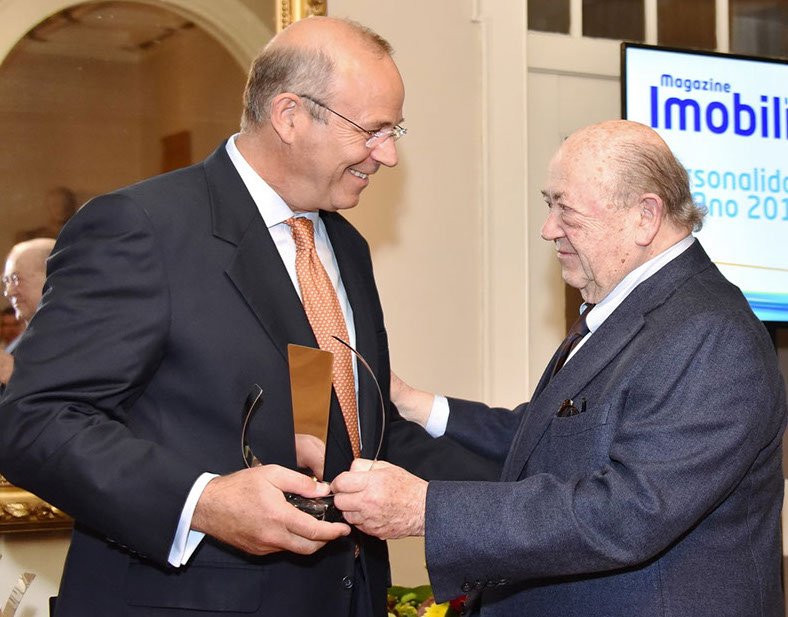 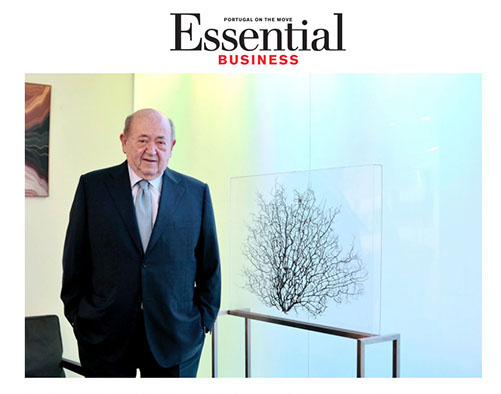 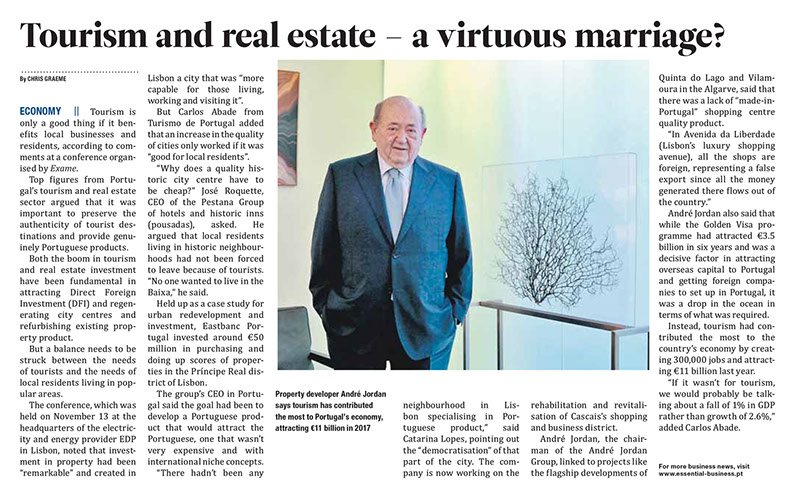 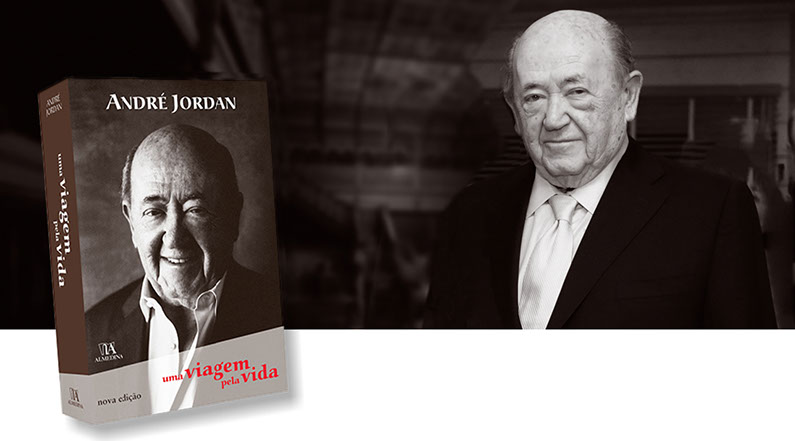 André Jordan's memoir is the account of the journey through an unusual life. With stages, departures and arrivals, people who get in and out of the carriage where the author takes us to unexpected places and introduces us to fantastic characters, armed with the serenity of those who saw and lived most, without reckoning or heroic acts.

A man of the world, an involuntary accumulator of nationalities and honours, André Jordan travelled trough different eras powered by his dreams, never taking his eyes off reality. Not being an academic, he lived and learned with brilliant minds, still acquiring the ability to combine intuition and deduction at a very young age. In describing the genesis and evolution of his projects, the implicit criticism of the financial system, the narrow-mindedness of those who control the money, the lack of preparation of decision-makers, is striking.

We read this book as a real life novel. With ingredients that attract and capture our attention: the plots, the suspense about the denouement of the quarrels, the conquerors and the maidens, the good and the bad of the tape. There is everything in the stories of this life story: scenes from thriller, fairy tales, historical romance, power struggles, financial chronicle, poetic prose. Psychological profiles are rigorously drawn. The settings described with precision to place the reader there.

Widely illustrated, André Jordan's A Journey Through Life brings us the testimony of a remarkable man, a fantastic first-person storyteller. It has the seal of publisher Almedina and is for sale online and in good Portuguese bookstores.

André Jordan publishes
a second edition of its memoir 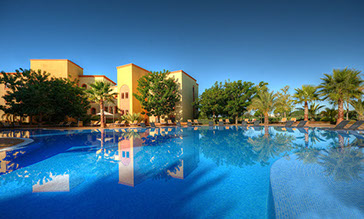 The connections to the golf practices and strict sustainability policies are trademarks of the André Jordan projects. Learn more about these developments following the dedicated links.

The André Jordan Group was created in the cosmopolitan scenario of the Wonderful City: Rio de Janeiro. In the 40s of the 20th century, Henryk Spitzman Jordan, a businessman of Polish nationality, starts reconstructing  the life of his family, forced to exile by the war in Europe.

More than 80 years later, the business group that Henryk Spitzman Jordan founded in Rio de Janeiro is still active. Over the past four decades under the impetus of his son, André Jordan, after crossing several historical upheavals and moving from Brazil to Portugal.

On this website, the visitor will find different elements that contribute to a better understanding of the trajectory of the André Jordan Group, mainly in the PROJECTS page, with images and information about current and past achievements.

In the GALLERIES page you will find photos and videos about André Jordan and the achievements of the Group.

On the page OBSERVATION DECK you will find texts and notes signed by André Jordan, on the progress of the world, as well as some comments and press clippings related to economic issues, real estate and tourism.